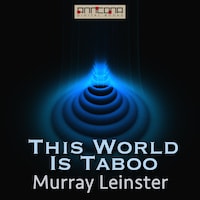 This World Is Taboo

This World Is Taboo is a science fiction novel by Murray Leinster first published in 1961.

Calhoun is an Interstellar Medical Serviceman, and he's needed on Dara. Trouble is: Dara is forbidden. Taboo. And breaking quarantine will make Calhoun a presumed plague-carrier and subject to being shot on sight by anyone from Weald.

But hey! If he did the smart thing, we wouldn't have a story! But why are men from Dara shooting at him?

Land on Dara? One might as well commit suicide!

Untouchable, like the Darans – That’s what they’d call Calhoun if he broke the quarantine. And they’d wipe him out on sight.

But Dara needed him and was the kind of challenge this Interstellar Med Serviceman would never dodge.

This World is Taboo first appeared as Pariah Planet in Amazing Stories, July 1961.