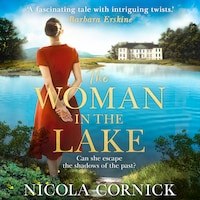 Woman In The Lake

For fans of Kate Morton and Tracy Rees comes a captivating novel about two women, separated by centuries, whose fates are bound together by one haunting secret.

‘A fascinating tale with intriguing twists.’ Barbara Erskine
‘I was hooked from the first pages.’ Gill Paul
‘Atmospheric and compelling’ Sarah Morgan
‘You just can’t put it down. Brilliant!’ Katie Fforde

‘I see it all again: the silver moon swimming beneath the water and the golden gown billowing out about her…’

1765: Lady Isabella Gerard asks her maid to take her new golden gown and destroy it. Its shimmering beauty has been tainted by the actions of her husband the night before.

Three months later: Lord Eustace Gerard stands beside the lake looking down at the woman in the golden gown. As the body slowly rolls over to reveal her face, it’s clear this is not his intended victim…

1996: Fenella Brightwell steals a stunning gown from a stately home. Twenty years later and reeling from the end of an abusive marriage, she wonders if it has cursed her all this time. Now she’s determined to discover the history behind the beautiful golden dress…

Also published in ebook as The Woman in the Golden Dress.