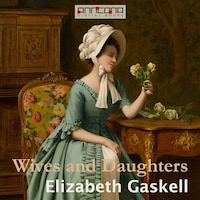 The novel looks at English life in the 1830s through the experiences of Molly Gibson, the daughter of a widowed doctor growing up in the provincial town of Hollingford. Molly and her father have lived alone since the death of her mother. Now Mr Gibson decides it will be in Molly's best interests for him to marry again. The new ”Mama” brings to the household many changes, including a glamorous new step-sister.

Mrs Gibson starts scheming to have Cynthia marry one of the sons of the local squire, but she does not understand Cynthia's reluctance or why Molly is meeting Mr Preston in the forest.

Secrets, love affairs and society gossip abound in this social commentary novel written by Mrs Gaskell. Love across the class divide, love of parents for children and step-children, love which is a 'heated fancy', love between sisters, and sincere self-sacrificing love of one person for another whether brother or beloved - all are delicately and delightfully drawn in this masterpiece of 19th century literature.

First published in the Cornhill Magazine as a serial from August 1864 to January 1866, It was partly written whilst Gaskell was staying with the salon hostess Mary Elizabeth Mohl as her home on the Rue de Bac in Paris. When Mrs Gaskell died suddenly in 1865, it was not quite complete, and the last section was written by Frederick Greenwood.

Elizabeth Cleghorn Gaskell, (1810-1865), was an English novelist and short story writer during the Victorian era. Her novels offer a detailed portrait of the lives of many strata of society, including the very poor, and are of interest to social historians as well as lovers of literature. Mrs. Gaskell, as she was often referred to, is considered one of the greatest British novelists of the Victorian era.