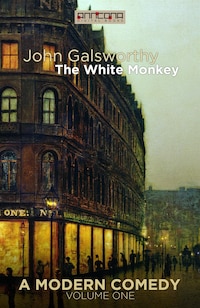 The Forsyte Saga chronicles the vicissitudes of the leading members of a large commercial upper middle-class English family. Only a few generations removed from their farmer ancestors, the family members are keenly aware of their status as "new money".  A titanic masterpiece  - nine hundred pages of a multi-generational story of a fictional English family that spans the Victorian, Edwardian, and post-World War I eras. It's the story of the Forsyte family, spanning several generations and several wars, and its obsession with "property."

A Modern Comedy  comprises a novel, The White Monkey, an interlude, A Silent Wooing, a second novel, The Silver Spoon, a second interlude, Passers By, and a third novel Swan Song. The principal characters are Soames and Fleur.

Also included in this edition is A Silent Woing, the first interlude in A Modern Comedy.

After the first trilogy, The Forsyte Saga, Galsworthy wrote two additional sequels (also each a trilogy); A Modern Comedy and End of the Chapter, which form what is commonly referred to as The Forsyte Cronicles.

John Galsworthy was an English novelist and playwright. He won the Nobel Prize for literature in 1932. The Nobel committee usually gives the prize for a lifetime of work, but in their decision, they specifically noted that Galsworthy deserved the prize “for his distinguished art of narration which takes its highest form in The Forsyte Saga.”