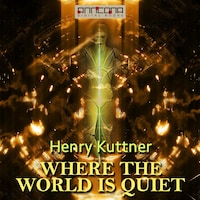 Where the World is Quiet

Where The World Is Quiet is a science fiction short story by Henry Kuttner (under the pen name of C. H. Liddell), first published in 1954.

Fra Rafael saw strange things, impossible things. Then there was the mystery of the seven young virginal girls of Huascan.

The life of an anthropologist is no doubt filled much of the time with the monotonous routine of carefully assembling powdery relics of ancient races and civilizations. But White's lone Peruvian odyssey was most unusual.

A story pseudonymously penned by one of the greats in the genre.

Henry Kuttner (1915–1958) was an American author of science fiction, fantasy and horror, an author who was one of the half dozen or so pillars of the Golden Age of Sci-Fi