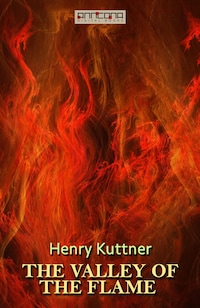 The Valley of the Flame

The Valley of the Flame is a science fiction novel by Henry Kuttner first published in 1946.

They warped Time itself to keep their secrets...

The year is 1985 and the location is somewhere in the vast, teeming jungles of the Amazon. Medical scientist Brian Raft and his two colleagues Dan Craddock and Bill Merriday are researching tropical diseases.

Somewhere deeper in the jungle drums have been beating for days and Craddock thinks that they have some sinister purpose.

Out of the unknown comes a canoe propelled by two men with paddles. One of these newcomers is sick, with a temperature far below normal, and appears to have some tropical disease. Then suddenly the two disappear. The next morning Raft, with five natives, sets out up the river in pursuit.

Valley of the Flame was first published in the March 1946 issue of the magazine Startling Stories. It appeared under the pseudonym "Keith Hammond", which was one of the many names Henry Kuttner published under.