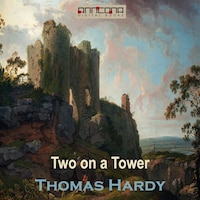 Two On A Tower

Two on a Tower (1882) is a novel by English author Thomas Hardy, classified by him as a romance and fantasy and now regarded as one of his minor works. The book is one of Hardy's Wessex novels, set in a parallel version of late Victorian Dorset.

Each night Swithin climbs the old tower of the title, in the grounds of the Constantine estate. Lady Constantine, whose husband has been absent some years on an extended hunting and exploring journey to Africa, joins the young man in his stargazing, and supports his astronomical ambitions by buying him equipment, though his dreams of scientific renown are disappointed. Their relationship then deepens and takes several twists and turns.

This is Hardy's most complete treatment of the theme of love across the class and age divide and the fullest expression of his fascination with science and astronomy.

Because the book defied the social norms of the day, upon release the book was called shocking, repulsive, and one critic called it Hardy's ”worst yet.”

Hardy wrote in a letter to Edmund Gosse on 10 Dec 1882, “I get most extraordinary criticisms of T. on a T. Eminent critics write & tell me in private that it is the most original thing I have done...while other eminent critics (I wonder if they are the same) print the most cutting rebukes you can conceive—show me (to my amazement) that I am quite an immoral person...”