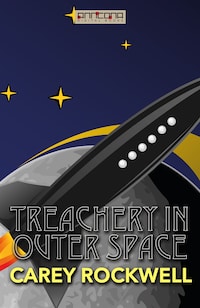 Treachery in Outer Space by Carey Rockwell is the sixth book of the on-going adventures of Tom Corbett in the Space Cadet Stories.

When Tom Corbett and his two pals are assigned to monitor the three giant spaceships which are entered in the most famous race in all space history, an adventure begins which is bound to make your blood tingle. The race is to the spaceport of the planet Titan where rich crystal mines are located...