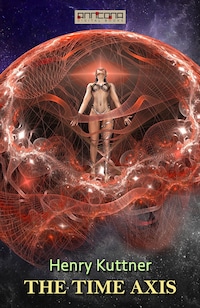 The Time Axis is a science fiction novel by Henry Kuttner first published in 1948.

Called to the end of time by a being known as The Face of Ea, four adventurers face a power that not even the science of that era could meet -- the nekron, negative matter, negative force, ultimate destruction for everything it touched!

The Time Axis is told from the first-person perspective of Jerry Cortland, a freelance journalist trying to escape his miserable past in Brazil. There, he’s attacked by a strange being of pure energy—negative energy—which burns his hand, and gives him a brief glimpse of clarity. This creature is responsible for a growing number of murders, and the burn victims seem to center around Jerry.

He’s contacted by scientists Ira De Kalb and Letta Essen, who reveal some shocking developments. De Kalb stumbled upon a puzzle-box from the far future, which gives flashes of realization and foretells The Face of Ea, the last city on Earth, besieged by a nekrotic plague of negative energy. That’s the same nekrotic being that burned Jerry, and those around him.

Now, the plague of nekrosis is growing: and as it does, it eats away at the fabric of time itself.