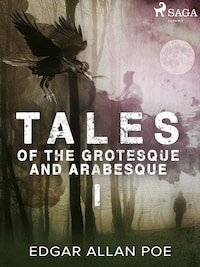 Tales of the Grotesque and Arabesque I

190 pages
AuthorEdgar Allan Poe
TypeE-book
SeriesHorror Classics
Categories
NovelsNovelsFantasyHorrorClassicsShort Stories
Share this book
From the mysterious marriage in ”Morella”, to the satirical and secretive vistas of ”The Man That Was Used Up”, or the depressed Roderick Usher, the reader is facing the first volume of E. A. Poe’s tales. Teeming with melancholy and vampirism, verging on the sanity’s uttermost rim, Poe’s characters often fall victims to supernatural happenings. Men wishing for their wife’s deaths, doppelgangers and hollow men, or bargains with the Devil – all these elements reveal the need for Poe’s protagonists to discuss, mock, and curse their (ab)normal predicaments.
E. A. Poe’s immortal heritage in the horror genre is unquestionable and if the reader is not quite familiar with the atmosphere depicted, they could always give Roger Corman’s movies from the Poe cycle a try: ”House of Usher” (1960), ”Pit and the Pendulum” (1961), ”The Tomb of Ligeia” (1964) – all starring Vincent Price. Edgar Allan Poe (1809-1849) was an American poet, author, and literary critic. Most famous for his poetry, short stories, and tales of the supernatural, mysterious, and macabre, he is also regarded as the inventor of the detective genre and a contributor to the emergence of science fiction, dark romanticism, and weird fiction. His most famous works include ”The Raven” (1945), ”The Black Cat” (1943), and ”The Gold-Bug” (1843).