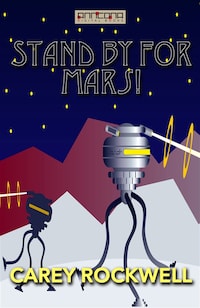 Stand By For Mars

Stand By For Mars! by Carey Rockwell is the first book of the on-going adventures of Tom Corbett in the Space Cadet Stories.

The books follow the adventures of Tom and his friends Roger Manning and Astro as they work their way through Space Academy to become officers of the Solar Guard. Along the way they tangle with space pirates, smugglers, and the threat of demerits for breaking the rules.