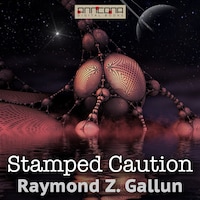 ”It's a funny thing, but most monsters seem to be of the opinion that it's men who are the monsters. You know, they have a point.”

When an alien spacecraft crashes in Missouri a team of army investigators is dispatched. Among the debris they find a Martian infant and decide to raise him in their lab.

Is he too strange to form a relationship with humans? Maybe, but he does have cute eye-stalks.

Stamped Caution was first published in the August 1953 issue of Galaxy magazine.

Raymond Zinke Gallun (1911-1994) was an American science fiction writer and one of the early sci-fi pulp writers who popularized the genre. His first book, People Minus X, was published in 1957, followed by The Planet Strappers in 1961. Gallun was honored with the I-CON Lifetime Achievement Award in 1985 at I-CON IV; the award was later renamed The Raymond Z. Gallun Award. His pen names includes Dow Elstar, E.V. Raymond and William Callahan.