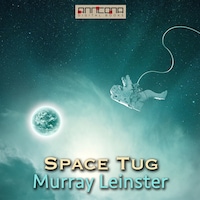 Space Tug is a science fiction novel by Murray Leinster first published in 1953.

Joe Kenmore heard the airlock close with a sickening wheeze and then a clank. In desperation he turned toward Haney. "My God, we've been locked out!"

Through the transparent domes of their space helmets, Joe could see a look of horror and disbelief pass across Haney's face. But it was true! Joe and his crew were locked out of the Space Platform.

Four thousand miles below circled the Earth. Under Joe's feet rested the solid steel hull of his home in outer space. But without tools there was no hope of getting back inside. Joe looked at his oxygen meter. It registered thirty minutes to live.

Space Tug by Murray Leinster is an independent sequel to the author's popular Space Platform, It is the second novel in the author's Joe Kenmore series.