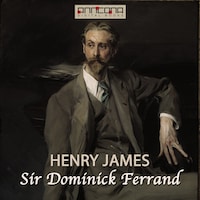 Sir Dominick Ferrand is a short novel by Henry James, first published in Cosmopolitan Magazine in 1892. It was later included in the collection The Real Thing and Other Tales, published in 1893.

”Levity” is not a word often applied to Henry James, but this story has about it an attractively lighthearted quality. It tells of Peter Baron, a poor, young struggling writer of adequate, if not transcendent, talent, who lives in a dreary London boarding house inhabited also by a mysteriously clairvoyant and beautiful young widow, with her small boy.

When Baron buys himself a second-hand writing desk to stimulate the creative juices, he finds carefully hidden within it a cache of letters that appear to compromise a recently deceased statesman. The discovery and his struggle to handle the questions they pose ultimately change his life. Along the way he also discovers, as a fringe benefit, a talent for what Americans (though probably not Jamesians) call Tin Pan Alley.