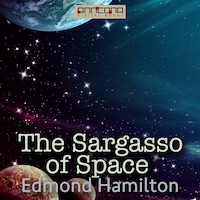 The Sargasso of Space

The Sargasso of Space is a science fiction novella by American author Edmond Hamilton first published in Astounding Stories 1931.

Helpless, doomed, into the graveyard of space floats the wrecked freighter Pallas.

Captain Crain faced his crew calmly. "We may as well face the facts, men," he said. "The ship's fuel-tanks are empty and we are drifting through space toward the dead-area."

Edmond Moore Hamilton (1904-1977) was a popular science-fiction author during the "Golden Age" of American science fiction.

Hamilton’s career began as a regular and frequent contributor to Weird Tales magazine. The first hardcover publication of Science Fiction stories was a Hamilton compilation, and he and E.E. “Doc” Smith are credited with the creation of the Space Opera type of story.

Hamilton worked for DC Comics authoring many stories for their Superman and Batman characters. Hamilton was instrumental in the early growth of the Legion of Super-Heroes feature, as one of its first regular writers.