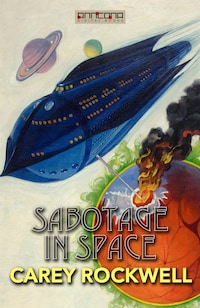 Sabotage in Space by Carey Rockwell is the seventh book of the on-going adventures of Tom Corbett in the Space Cadet Stories.

Tom, Astro and Roger are determined to find the saboteurs but get framed in the process, risking court martial and expulsion from the Space Academy.