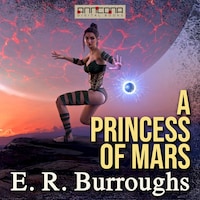 A Princess of Mars

A Princess of Mars is a science-fiction novel by E. R. Burroughs.

John Carter, an American Civil War veteran, goes prospecting in Arizona and, when set upon by Indians, is mysteriously transported to Mars, called "Barsoom" by its inhabitants. Carter finds that he has great strength on this planet, due to its lesser gravity.

Carter soon falls in among the Tharks, a nomadic tribe of the planet's warlike, four-armed, green inhabitants. Thanks to his strength and combat abilities he rises in position in the tribe and earns the respect eventually the friendship of Tars Tarkas, one of the Thark chiefs.

The Tharks subsequently capture Dejah Thoris, Princess of Helium, a member of the humanoid red Martian race. The red Martians inhabit a loose network of city states and control the desert planet's canals, along which its agriculture is concentrated. Carter rescues her from the green men to return her to her people.

This is the first novel in Burrough’s Barsoom series where John Carter in the late 1800s is mysteriously transported from Earth to a Mars. Audio read by Mark Nelson, running time 7 hours, 22 min. Also available as ePUB, 67 600 words, average reading time 5 hours, 35 min.