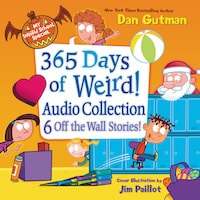 Every day is an adventure for A. J. and the gang. Now your favorite holiday hijinks are available in a single audio collection, perfect for My Weird School fans!

Back to School, Weird Kids Rule!

Summer is almost over, and you know what that means—time to head back to school! But when a tropical storm ends A.J.'s vacation earlier than expected, he and his family have to stay at Andrea's house. Ugh, disgusting!

Soon after, everyone in the house starts getting cabin fever, and even back-to-school shopping won't calm the kids down. So, Andrea and A.J. are sent to Camp Ockatollyquay. The catch? It's a camp to get kids ready for school! But not to worry—Andrea and A.J. rally their Ella Mentry School friends to end their summer on a note they'll never forget.

It’s Halloween, and you know what that means! Candy! Costumes! More candy! What would happen if a kid ate a million hundred pounds of chocolate in one night? One thing’s for sure—when the kids from Ella Mentry School go trick-or-treating, it will be a Halloween to remember.

Deck the Halls, We’re off the Walls!

It's Christmas, and you know what that means! Santa Claus is coming to town! Or at least to the local mall. But what happens when kid rapper Cray-Z gives a Christmas concert at the same mall and all his fans go bananas? One thing's for sure—if A.J. and the gang from Ella Mentry School want to save the day, they will need a Christmas miracle.

It's the week of Valentine's Day, and A.J.'s class is getting a foreign exchange student! His name is Pierre, and he's from France. But what happens when Pierre challenges A.J. to a duel (or at least a thumb war) over Andrea? One thing's for sure: when L-O-V-E comes to Ella Mentry, it spells the weirdest Valentine's Day story in the history of the world!

Hip, hop, hooray! Its Easter, and this year Mayor Hubble is hosting an Easter egg roll and a special egg hunt at the mayor’s mansion. And A.J. and the gang are invited! But when Mayor Hubble reveals that the prize golden egg has a thousand dollars inside it, the egg hunt becomes a wacky free-for-all with a photo finish.

Bummer in the Summer!

School’s almost out for the summer, and A.J. is dreaming about all the fun things he’s going to do on vacation.

But A.J.’s dream quickly turns into a nightmare when three familiar spirits appear to show him summers past, present, and yet to come. Will they be able to convince him to leave his bad ways behind? Or will this summer end up being a total bummer?