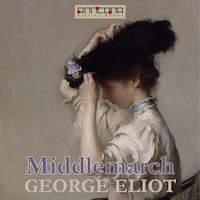 Middlemarch: A Study of Provincial Life is a novel by George Eliot, the pen name of Mary Anne Evans, later Marian Evans.

It is her seventh novel, the first one-volume edition was published in 1874, and attracted large sales. Subtitled ”A Study of Provincial Life," the novel is set in the fictitious Midlands town of Middlemarch during the period 1830–32.

It has multiple plots with a large cast of characters, and in addition to its distinct though interlocking narratives it pursues a number of underlying themes, including the status of women, the nature of marriage, idealism and self-interest, religion and hypocrisy, political reform, and education.

The pace is leisurely, the tone is mildly didactic (with an authorial voice that occasionally bursts through the narrative), and the canvas is very broad.

In december 2015, BBC Culture polled book critics outside the UK, to give an outsider’s perspective on the best in British literature. Out of 100 listed novel, Middlemarch by George Eliot listed as #1.  42% of the critics polled included it in their lists.

Mary Anne Evans (22 November 1819 – 22 December 1880), better known by her pen name George Eliot, was an English novelist, journalist and translator, and one of the leading writers of the Victorian era. She is the author of seven novels, including Adam Bede (1859), The Mill on the Floss (1860), Silas Marner (1861), Middlemarch (1871–72), and Daniel Deronda (1876), most of them set in provincial England and known for their realism and psychological insight.