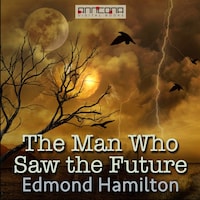 The Man Who Saw the Future

The Man Who Saw the Future is a science fiction short story by Edmond Hamilton first published in 1930.

A man from the Dark Ages,  an assistant apothecary in 1444 Paris is investigating mysterious thunderclaps in a field, when he is plucked from his time and deposited in the miraculous world of 1944.

The Man Who Saw the Future was first published in Amazing Stories October 1930.

Edmond Moore Hamilton (1904-1977) was a popular science-fiction author during the "Golden Age" of American science fiction.

Hamilton’s career began as a regular and frequent contributor to Weird Tales magazine. The first hardcover publication of Science Fiction stories was a Hamilton compilation, and he and E. E. “Doc” Smith are credited with the creation of the Space Opera type of story.

Hamilton worked for DC Comics authoring many stories for their Superman and Batman characters. Hamilton was instrumental in the early growth of the Legion of Super-Heroes feature, as one of its first regular writers.