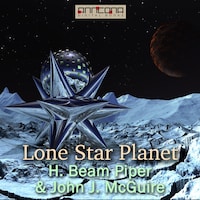 The story of a junior diplomat and his first posting to a planet of Texans whose dinosaur-sized cattle have to be herded with tanks, and whose system of government derives its character from Mencken's 1924 essay "The Malevolent Jobholder," -- a system under which the killing of a practicing politician is considered justifiable homicide!

New Texas: its citizens figure that name about says it all. The Solar League ambassador to the Lone Star Planet has the unenviable task of convincing New Texans that a s'Srauff attack is imminent, and dangerous. Unfortunately it's common knowledge that the s'Srauff are evolved from canine ancestors—and not a Texan alive is about to be scared of a talking dog! But unless he can get them to act, and fast, there won't be a Texan alive, scared or otherwise!

Henry Beam Piper (1904-1964) was an American science fiction author. He wrote many short stories and several novels. He is best known for his extensive Terro-Human Future History series of stories and a shorter series of "Paratime" alternate history tales. Piper's stories fall into two camps: stark space opera, such as Space Viking, or stories of cultural conflict or misunderstanding, such as Little Fuzzy or the Paratime stories.