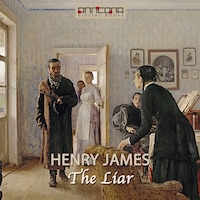 The Liar is a short story by Henry James, which first appeared in The Century Magazine in May-June 1888, and in book form 1889.

It is the story of a young successful painter’s dilemma when he reconnects with the woman he once loved during a visit to an English country house, and finds her married to a man of a vile, dishonest nature.

Concerned that her own purity has been spoilt, he tests her to see whether she is only shielding her husband out of love.

His surprise is great when he learns that her husband is susceptible to a very peculiar habit.