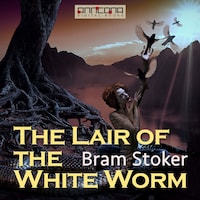 The Lair of the White Worm

The Lair of the White Worm (also known as The Garden of Evil) is a horror novel by Irish author Bram Stoker, who also wrote Dracula. It is partly based on the legend of the Lambton Worm.

The Lair of the White Worm was Bram Stoker's twelfth and last novel. This novel, along with The Jewel of Seven Stars, is one of his most famous after Dracula. The novel is a horror story about giant white worm that can transform itself into a woman.

This book centers on Adam Salton who is contacted by his great uncle in England, for the purpose of establishing a relationship between these last two members of the family.

Adam travels to Richard Salton's house in Mercia, and quickly finds himself in the center of some inexplicable occurrences. The new heir to the Caswall estate, Edgar Caswall appears to be making some sort of a mesmeric assault on a local girl. And, a local lady, Arabella March, seems to be running a game of her own, perhaps angling to become Mrs. Caswall.

There is something strange about Lady March, something inexplicable and evil....

The Lair of the White Worm was published in 1911, the year before Stoker's death.

The Lair of the White Worm was first published in the UK in 1911, the year before Stoker's death. This edition of the book was republished in an abridged version in the UK in 1925. The book was partly rewritten and condensed to only 28 chapters. It is not known who did this abridgment. This edition was reprinted several times in both the UK and US. This was for a long time the only version of the novel available in the UK until the original 1911 edition was republished in 1986 under the title Dracula and The Lair of the White Worm.

Note: This book contains racial comments that may be offensive to modern listeners.