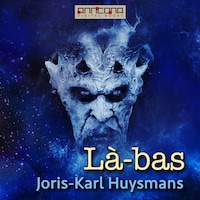 Là-Bas, translated as Down There or The Damned, is a novel by the French writer Joris-Karl Huysmans. This is Huysmans' most famous work after À rebours (published in English as Against the Grain or Against Nature).

Là-Bas deals with the subject of Satanism in contemporary France, and the novel stirred a certain amount of controversy on its first appearance. It is the first of Huysmans' books to feature the character Durtal, a thinly disguised portrait of the author himself, who would go on to be the protagonist of all of Huysmans' subsequent novels: En route, La cathédrale and L'oblat.

The plot of Là-Bas concerns the novelist Durtal, who is disgusted by the emptiness and vulgarity of the modern world. He seeks relief by turning to the study of the Middle Ages and begins to research the life of the notorious 15th-century child-murderer Gilles de Rais. Through his contacts in Paris, Durtal finds out that Satanism is not simply a thing of the past but alive in turn of the century France.

He embarks on an investigation of the occult underworld with the help of his lover Madame Chantelouve. The novel culminates with a description of a black mass.

Reader's note: This novel certainly reaches to the depths of depravity and blasphemy, and achieved some notoriety for doing so. A redeeming feature, if one is required, is that Durtal begins in this book a pilgrimage; like Dante's hero, he begins this in a horrible and God-forsaken place.

Charles-Marie-Georges Huysmans (1848-1907) was a French novelist and art critic who published his works as Joris-Karl Huysmans. He is most famous for the novel À rebours (1884), published in English as Against the Grain or Against Nature.