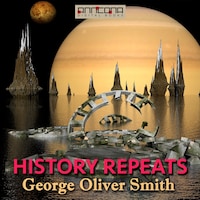 A space detective with an evolved (super intelligent, talking) dog is searching for a kidnapped heiress in the corrupt Xanabar Empire.

There are--and very probably will always be--some Terrestrials who can't, and for that matter don't want, to call their souls their own....

History Repeats was first published in Astounding Science Fiction May 1959.

Smith wrote mainly about outer space, with such works as Operation Interstellar (1950), Lost in Space (1959), and Troubled Star (1957). Smith continued regularly publishing science fiction novels and stories until 1960. He was given the First Fandom Hall of Fame award in 1980.