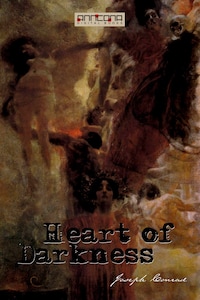 134 pages
AuthorJoseph Conrad
TypeE-book
Categories
FictionNovels
Share this book
Heart of Darkness (1899) is a short novel by Polish novelist Joseph Conrad, written as a frame narrative, about Charles Marlow’s life as an ivory transporter down the Congo River in Central Africa. The river is “a mighty big river, that you could see on the map, resembling an immense snake uncoiled, with its head in the sea, its body at rest curving afar over a vast country, and its tail lost in the depths of the land.” In the course of his travel in central Africa, Marlow becomes obsessed with Mr. Kurtz.
Heart of Darkness exposes the dark side of European colonization while exploring the three levels of darkness that the protagonist, Marlow, encounters: the darkness of the Congo wilderness, the darkness of the Europeans' cruel treatment of the African natives, and the unfathomable darkness within every human being for committing heinous acts of evil. The story is a complex exploration of the attitudes people hold on what constitutes a barbarian versus a civilized society and the attitudes on colonialism and racism that were part and parcel of European imperialism.
The novella Heart of Darkness has been variously published and translated into many languages. In 1998, the Modern Library ranked Heart of Darkness as the sixty-seventh of the hundred best novels in English of the twentieth century.
Joseph Conrad has acknowledged that Heart of Darkness is in part based on his own experiences during his travels in Africa. At the age of 31, he was appointed by a Belgian trading company to serve as the captain of a steamer on the Congo River in 1890. Conrad, who was born in Poland and later settled in England, had eagerly anticipated the voyage, having decided to become a sailor at an early age. While sailing up the Congo river from one station to another, the captain became ill, and Conrad assumed command of the boat and guided the ship to the trading company's innermost station. He reportedly became disillusioned with Imperialism after witnessing the cruelty and corruption perpetrated by the European companies in the area, and the novella's main narrator, Charlie Marlow, is believed to have been based upon him.
Joseph Conrad (1857-1924) was a Polish author who wrote in English after settling in England. He was granted British nationality in 1886, but always considered himself a Pole.
Conrad is regarded as one of the greatest novelists in English, although he did not speak the language fluently until he was in his twenties (and always with a marked accent). He wrote stories and novels, often with a nautical setting, that depict trials of the human spirit in the midst of an indifferent universe. He was a master prose stylist, who brought a distinctly non-English tragic sensibility into English literature.
While some of his works have a strain of romanticism, he is viewed as a precursor of modernist literature. His narrative style and anti-heroic characters have influenced many authors, including D. H. Lawrence, F. Scott Fitzgerald, William Faulkner, Ernest Hemingway, George Orwell, Graham Greene, Malcolm Lowry, William Golding, William S. Burroughs, Joseph Heller, Italo Calvino, Gabriel García Márquez, J. G. Ballard, John le Carré, V.S. Naipaul, Hunter S. Thompson, J.M. Coetzee and Salman Rushdie.
Films have been adapted from or inspired by Conrad's Almayer's Folly, An Outcast of the Islands, Heart of Darkness, Lord Jim, Nostromo, The Secret Agent, The Duel, Victory, The Shadow Line, and The Rover.