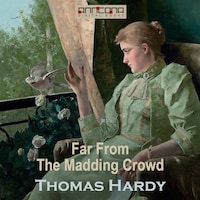 Far From The Madding Crowd

The novel is the first to be set in Hardy's fictional county of Wessex in rural south west England. It deals in themes of love, honour and betrayal, against a backdrop of the seemingly idyllic, but often harsh, realities of a farming community in Victorian England. It describes the farmer Bathsheba Everdene, her life and relationships - especially with her lonely neighbour William Boldwood, the faithful shepherd Gabriel Oak, and the thriftless soldier Sergeant Troy.

Hardy's growing taste for tragedy is also evident in the novel. According to Virginia Woolf, ”The subject was right; the method was right; the poet and the countryman, the sensual man, the sombre reflective man, the man of learning, all enlisted to produce a book which . . . must hold its place among the great English novels.”

The book is often regarded as an early piece of feminist literature, since it features an independent woman with the courage to defy convention by running a farm herself. Although Bathsheba's passionate nature leads her into serious errors of judgment, Hardy endows her with sufficient resilience, intelligence, and good luck to overcome her youthful folly.

The novel was listed at number 48 on the BBC's survey The Big Read in 2003. The book finished 10th on the Guardian's list of greatest love stories of all time in 2007. The novel has been dramatised several times, notably in an Oscar-nominated 1967 film directed by John Schlesinger.

On publication, critical notices were plentiful and mostly positive. Hardy revised the text extensively for the 1895 (this) edition.