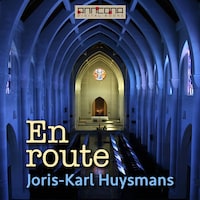 En route is a novel by the French writer Joris-Karl Huysmans.

En route is the  second book by Huysmans concerning the religious development of the novelist Durtal, who in the first book ("La-bas") experienced depravity and Satanism.

In this book he struggles desperately to find a foothold in the Catholic faith. He is aided by his aesthetic sensitivities and the support of an understanding priest. But it is not until he undertakes a retreat in a Trappist monastery that he achieves depth of spiritual transformation.

Charles-Marie-Georges Huysmans (1848-1907) was a French novelist and art critic who published his works as Joris-Karl Huysmans. He is most famous for the novel À rebours (1884), published in English as Against the Grain or Against Nature.