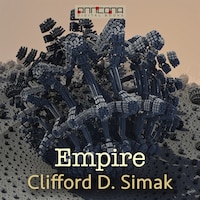 Empire is a science fiction novel by Clifford D. Simak, first published in 1951.

In a future time, the solar system is powered by one energy source, controlled by one huge organisation, which has plans to use this control to dominate the planets.

Unknown to them, a couple of maverick scientists accidentally develop a completely new form of energy supply and threaten the corporation's monopoly. Naturally, the corporation can't allow this to happen...

A stunning story about the manipulation of pure energy, climaxing in interstellar conflict.

Clifford Donald Simak (1904 -1988) was an American science fiction writer. He was honored by fans with three Hugo Awards and by colleagues with one Nebula Award. The Science Fiction Writers of America made him its third SFWA Grand Master and the Horror Writers Association made him one of three inaugural winners of the Bram Stoker Award for Lifetime Achievement.