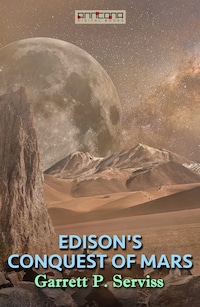 Edison's Conquest of Mars is a science fiction novel by Garrett P. Serviss first published in 1898.

Edison's Conquest of Mars is a continuation of the story The War of the Worlds by H.G. Wells.

Edison's Conquest of Mars was published in 1898 as an unauthorized sequel to H. G. Wells' The War of the Worlds, but did not achieve the fame of its predecessor. It was commissioned by The New York Evening Journal.

The book was endorsed by Thomas Edison, the hero of the book -- though not by Wells.

Historically, the work is one of the earliest to employ the interplanetary theme. It is the first to portray a battle fought by space craft in the airless void; and possibly the first also to propose the use of sealed suits that enable men to traverse a vacuum. Of the more minor twists of plot initially found here that have since become parts of the "pulp" science-fiction writers' standard stock-in-trade, there are literally too many to mention.

Edison's Conquest of Mars, is one of the many science fiction novels published in the nineteenth century. Although science fiction was not at the time thought of as a distinct literary genre, it was a very popular literary form, with almost every fiction magazine regularly publishing science fiction stories and novels.

This volume includes an introduction by A. Langley Searles.

Garrett Putnam Serviss (1851-1929) was an American astronomer, popularizer of astronomy, and early science fiction writer. Serviss showed a talent for explaining scientific details in a way that made them clear to the ordinary reader.

Serviss' favorite topic was astronomy, and of the fifteen books he wrote, eight are devoted to it. He unquestionably was more widely read by the public on that topic than anyone prior to his time. He also wrote six works of fiction in his lifetime, all of which would today be classified as science fiction.