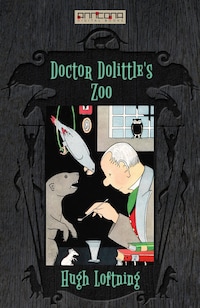 “A Zoo,” said Doctor John Dolittle, “should be an animal home, not an animal prison.” So with the help of all his faithful animal family and Tommy Stubbins, he planned and carried out, in the greatest garden of the old house at Puddleby, the most wonderful Zoo that has ever been dreamed of. It became truly a complete Animal Town, with special accommodations for all sorts of animals – a Squirrel Hotel, a Mouse and Bat Club, a Library, restaurants, markets and a well-organized police force (regrettably necessary because some of the dogs would chase the squirrels).

And in the Zoo, things happen in a thrilling succession – animal dramas, comedies, tragedies and mysteries. No one can remain unmoved by the story of Leery the Outcast Rat’s heroic sacrifice for friendship’s sake, or the devotion of the mother mouse, Sarsaparilla, to her little ones in the face of danger. Indeed, as the Doctor himself observes to the Hotel Rat, “You know, you rats and mice really lead more thrilling and exciting lives than we humans do.”

The climax of the happenings in the Zoo is the supreme effort of the Doctor and the animals I solving a great Mystery. It is Kling, the Detective Dog, who sets them at last on the right track and thus brings about a great good fortune for all the animals.

With 88 black-and-white illustrations by the Author.

Please note that this book was written at a different time and includes attitudes, which are now considered racist. Some modern editions are available with some of this changed - this is the original text, as it was first published in 1925.