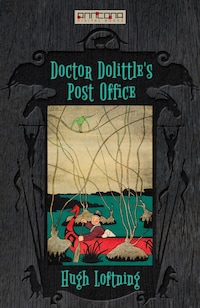 Doctor Dolittle discovers that there is not only an animal language but animal writing as well. For instance, four or five little scratches made by a swallow and a house where he has nested may tell the next swallow who comes that way: “Don’t build your nest in this house. They have a cat here!” or “Good house. Flies plentiful. Building mud can be found behind the Stable.”

Having discovered this, it didn’t take the Doctor long to see the immense possibilities in a mail service for the birds and the animals. The idea occurred to him during a visit to the kingdom of Fantippo and he put it into immediate execution, with the help of his faithful animal friends, Jip, Dab-Dab, Too-Too, Cheapside, and the others.

It is the fastest mail service in the world and it is called the Swallow Mail, though thrushes, gulls and penguins assist with the deliveries in the colder climates. It has all sorts of innovations – for instance, good pens in the post office, postmen who tap once for a bill and twice for a letter (Cheapside’s suggestion, this, “so that folks in the house will know whether to come and get the mail or not”); and regular afternoon tea at the post office for both staff and customers. There is a correspondence course in animal etiquette and a prize story contest and – a great mail robbery. So all in all, the little Doctor is kept very busy.

With 76 black-and-white illustrations by the Author.

Doctor Dolittle's Post Office is the third of Hugh Lofting's Doctor Dolittle books. Set on the West Coast of Africa, the book follows the episodic format of most other books in the series.

Please note that this book was written at a different time and includes attitudes, which are now considered racist. Some modern editions are available with some of this changed - this edition is the original text, as it was first published in 1923.