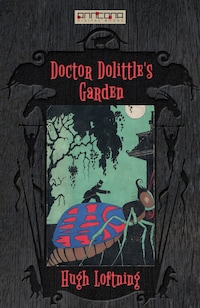 In Doctor Dolittle's garden lives a host of creatures that have naturally gravitated to the little animal doctor, and it is the insects that play a large part in his new adventures. When the good sets out to discover all there is to know about insects, many of the small creatures eagerly tell him their life-stories. For instance, a water beetle tells a thrilling tale of his amazing trip across the ocean.

One of the Doctor’s most popular achievements in his making the mongrel breed into the dog vogue of the day, accomplished very cleverly indeed. In the course of the story, Chee-Chee tells a strange tale of “The Days Before There Was a Moon,” a tale handed down by his great-great-grandmother.

Through his contact with the insects, Doctor Dolittle learns of a mysterious giant race of moths. Finally he is visited by a giant moth, and realizes he has met an insect of another world. After overcoming inhuman difficulties with the language, he knows his fame as a physician and naturalist has reached worlds beyond his own, and he finally undertakes a perilous and extraordinary journey to the moon.

With 75 black-and-white illustrations by the Author.

Doctor Dolittle's Garden was first published in 1927. The first part would fit very well into Doctor Dolittle's Zoo, which this book follows. From now on, Lofting would write the books in chronological order.

Please note that this book was written at a different time and includes attitudes, which are now considered racist. Some modern editions are available with some of this changed - this is the original text, as it was first published in 1927.