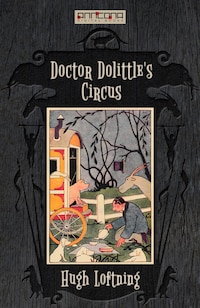 Here are Doctor Dolittle’s adventures with his friends a part of The Greatest Show on Earth. Unwilling to sell the Pushmi-pullyu to the circus proprietor, John Dolittle arranges that the timid two-headed animal shall be an independent part of the circus.

His entire household travels wherever the Pushmi-pullyu is exhibited, and the Cats’-Meat-Man goes along to drive the caravan. Soon they get enough money to pay back the sailor for the boat they had borrowed for the voyage to Africa, in spite of the Doctor’s terrible habit of letting children into the show free when no one was looking.

Of course the Doctor could do all sorts of things with the animals that the circus proprietor never dreamt were possible and before long the animals with Hop, the clown, and Hercules, the strong man, urged John Dolittle to become their manager as well as the Pushmi-pullyu’s. And of course the Dolittle circus was an entirely new kind of circus, especially designed for children. The profits were shared by all the performers, the children were given packets of peppermints, and all the animals were happy and enjoyed their own performance as much as the audience who watched them.

With 80 black-and-white illustrations by the Author.

Doctor Dolittle's Circus, first published in 1924, is the fourth book in the Doctor Dolittle series and set in England sometime between the original story and the later voyages narrated by Stubbins. It is one of the novels in the series that was adapted into the film Doctor Dolittle.

Please note that this book was written at a different time and includes attitudes, which are now considered racist. Some modern editions are available with some of this changed - this recording is of the original text, as it was first published in 1924.