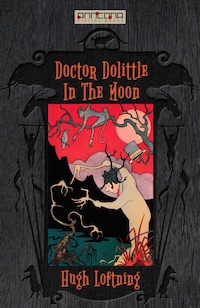 Doctor Dolittle in the Moon

This tale of Doctor Dolittle tells of his adventures in the moon wither he journeys back on the back of a giant moth, with Tommy Stubbins, Chee-Chee and Polynesia.

The Doctor’s active efforts in the pursuit of science and understanding of his fellow creatures have now extended to the vegetable kingdom and its strange languages. In the moon, he finds vegetables and insects play a larger part than they do on earth. The Vanity Lily is one of his happiest discoveries; a flower possessing the most advanced form of vegetable intellect, and the finding of the Man in the Moon himself is one of the high spots of the story. What with whispering vines and singing forests, the doctor finds full scope for his clever faculty of learning new languages.

The real climax is capped when Tommy Stubbins is kidnapped and sent back to earth, leaving Doctor Dolittle in the moon to manage as best he can. But, as usual, is equal to the occasion and endears himself anew to his world of readers.

With 70 black-and-white illustrations by the Author.

Doctor Dolittle in the Moon (1928) was intended to be the last of Hugh Lofting's Doctor Dolittle books, and differs considerably in tone from its predecessors; the stripped down narrative does not have room for any of the sub-plots and tales previously present. Instead there is a growing sense of an event about to happen that is almost spooky in tone. There are some very complex passages for a children’s book; for example, it begins with a meditation about what the writer expects from the reader and vice versa.

Doctor Dolittle in the Moon was ahead of its time in that it introduced the concept of 'ecology' (although it did not use that term).

Please note that this book was written at a different time and includes attitudes, which are now considered racist. Some modern editions are available with some of this changed - this is the original text, as it was first published in 1928.