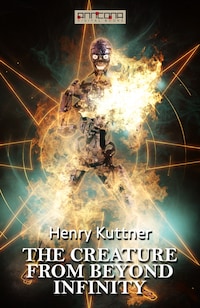 The Creature from Beyond Infinity

The Creature from Beyond Infinity is a science fiction novel by American author Henry Kuttner first published in 1940.

Henry Kuttner wrote a lot, in several different styles, but his work was nearly always fast-paced, full of action, and either humorous or creepy, depending on what was called for.  His novel The Creature from Beyond Infinity has some of all of that, and more.

Like a great, lethal snake, plague creeps through the galaxies. No conscious entity can halt its progress, and life is slowly draining from planet after planet.

Only one super-intelligence is capable of preventing cataclysm. To do it, he must penetrate far beyond infinity--to the formless, deathless creature out to kill the universe.

A lone space traveler arrives on Earth seeking a new planet to colonize, his own world dead. At the same time a mysterious plague has infected Earth that will wipe out all life.

Can a lone scientist stop the plague and save the world? Or will the alien find himself on another doomed planet?