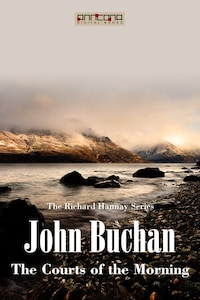 The Courts of the Morning

The Courts of the Morning is a 1929 adventure novel by John Buchan, featuring his character Sandy Arbuthnot. The prologue is narrated by Richard Hannay, so the novel is sometimes included in Buchan's Hannay series. The action is set in Olifa, a fictional country on the west coast of South America.

When Sandy Arbuthnot's friend John Blenkiron discover that a charismatic industrial tycoon is plotting to rule the world from his base in the small South American country of Olifa, Sandy leads a revolution to scuttle the plot and allow the Olifans to decide their own fate.

Buchan's fifteenth novel, The Courts of the Morning was published in September, 1929, by Hodder and Stoughton. Contemporary reviewer J. B. Priestley criticized the lengthy space devoted to detailing troop movements and describing the terrain, exposition that slows down the more thrilling sequences such as Janet's hostage ordeal. (Buchan never went to South America, so all the lovingly described landscapes are fictional.) Buchan biographer Andrew Lownie also felt that Castor's redemption was unrealistic. Physical and racial stereotyping is used to describe several characters, such as the noble, mystic Indians and the scarred and misshapen toughs in Castor's bodyguard.

Major-General Sir Richard Hannay, KCB, OBE, DSO, Legion of Honour, is a fictional secret agent and army officer created by Scottish novelist John Buchan. In his autobiography, Memory Hold-the-Door, Buchan suggests that the character is based, in part, on Edmund Ironside, from Edinburgh, a spy during the Second Boer War.

Richard Hannay was one of the first modern spy thriller heroes and as such has heavily influenced the genre. Today, considered in the light of mainstream espionage fiction, Hannay appears to be badly clichéd, although, as he was created well before his attributes became clichéd, Hannay could be more accurately described as a seminal character of the spy thriller genre.

After a brief legal career Buchan simultaneously began both his writing career and his political and diplomatic career, serving as a private secretary to the colonial administrator of various colonies in Southern Africa. He eventually wrote propaganda for the British war effort in the First World War. Once he was back in civilian life Buchan was elected Member of Parliament for the Combined Scottish Universities, but he spent most of his time on his writing career, notably writing The Thirty-Nine Steps and other adventure fiction.