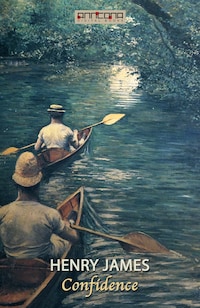 Confidence is a novel by Henry James, first published 1879.

While sketching in Siena, Bernard Longueville meets Angela Vivian and her mother. Later, Bernard's friend and self-proclaimed ”mad” scientist Gordon Wright calls Longueville to Baden-Baden to pass judgment on whether he should marry Angela. Bernard recommends against it, based on his belief that Angela is something of a mysterious coquette.

So Gordon marries the lightweight (in both senses) Blanche Evers. After a couple years Longueville again meets Angela at a French beach resort and realizes he loves her…

It may well be futile to look for themes in this account of rather entangled romances. The book only seems to say that people can always deceive themselves and life can't be regulated on ”scientific” principles, which falls on the shoulders of Gordon as a main character.