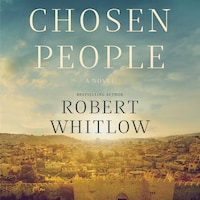 From the streets of Atlanta to the alleys of Jerusalem, Chosen People is an international legal drama where hidden motives thrive, the risk of death is real, and the search for truth has many faces.

During a terrorist attack near the Western Wall in Jerusalem, a courageous mother sacrifices her life to save her four-year-old daughter, leaving behind a grieving husband and a motherless child.

Hana Abboud, a Christian Arab Israeli lawyer trained at Hebrew University, typically uses her language skills to represent international clients for an Atlanta law firm. When her boss is contacted by Jakob Brodsky, a young Jewish lawyer pursuing a lawsuit on behalf of the woman’s family under the US Anti-Terrorism laws, he calls on Hana’s expertise to take point on the case. After careful prayer, she joins forces with Jakob, and they quickly realize the need to bring in a third member for their team, an Arab investigator named Daud Hasan, based in Israel.

As the case evolves, this team of investigators will uncover truths that will forever change their understanding of justice, heritage, and what it means to be chosen for a greater purpose.

First of the Chosen People novels (Chosen People, Promised Land)Christian fiction set in the USA and in IsraelFull-length novel (over 120,000 words)