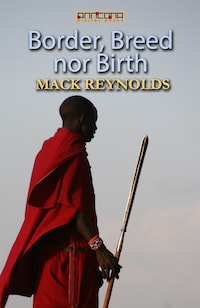 Border, Breed nor Birth is a science-fiction novel by Dallas McCord "Mack" Reynolds. It is the second in a sequence of near-future stories set in North Africa, which also includes Black Man's Burden (1961), Black Sheep Astray (1973), and The Best Ye Breed (1978).

During his meeting in Dakar with the head of the Reunited Nations African Development Project, Dr. Homer Crawford resigns his post as leader of the Sahara Division team to become El Hassan, the liberator and would-be tyrant of North Africa. Threatened with arrest, Crawford and his followers hide in the Sahara erg. They intercept news that the Arab Union has occupied Tamanrasset, ostensibly to protect the region against El Hassan rioters…

Border, Breed nor Birth and the North Africa series have been called a "notable exception" to the indirect treatment of racial issues in 1960s science fiction magazines.

Border, Breed nor Birth was originally published as a two-part series in Analog Science Fiction and Fact (July and August 1962). In 1972, Ace Books reprinted it along with the first book in the sequence, Black Man's Burden.

The readers of Analog voted Border, Breed nor Birth as the second best story of its issues in the magazine's Analytical Laboratory (AnLab) poll.[6] The popularity of Border, Breed nor Birth and Black Man's Burden prompted Reynolds to write Black Sheep Astray for the short-story collection Astounding: John W. Campbell Memorial Anthology, a special tribute by thirteen Astounding authors to the memory of science fiction and fantasy magazine editor John W. Campbell.

His work is noteworthy for its focus on socioeconomic speculation, usually expressed in thought-provoking explorations of Utopian societies from a radical, sometime satiric, perspective. He was a considerably popular author from the 1950s to the 1970s, especially with readers of science fiction and fantasy magazines.

Reynolds was the first author to write an original novel based upon the 1966-1969 NBC television series Star Trek, named Mission to Horatius (1968).