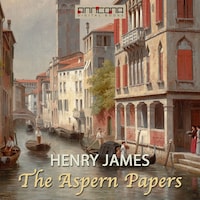 The Aspern Papers is a novella written by Henry James, originally published in The Atlantic Monthly in 1888, with its first book publication later in the same year.

One of James' best-known and most acclaimed longer tales, The Aspern Papers is based on the letters Percy Bysshe Shelley wrote to Mary Shelley's stepsister, Claire Clairmont, who saved them until she died. Set in Venice, The Aspern Papers demonstrates James' ability to generate suspense while never neglecting the development of his characters.

One of James’s favorite short novels, The Aspern Papers tells of the efforts of the nameless narrator to procure the papers of a famous, but now dead, American poet. His attempts to secure them from the poet’s former lover and her niece, now recluses in Venice, are stymied both by them, and by his own mistakes in his quest.