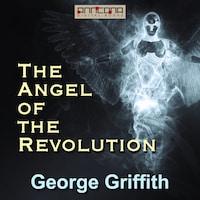 The Angel of the Revolution

The Angel of the Revolution: A Tale of the Coming Terror (1893) is a science fiction novel by the English writer George Griffith. It was his first published novel and remains his most famous work.

A lurid mix of Jules Verne's futuristic air warfare fantasies, the utopian visions of News from Nowhere and the future war invasion literature of Chesney and his imitators, it tells the tale of a group of self-styled 'terrorists' who conquer the world through airship warfare.

Led by a crippled, brilliant Russian Jew and his daughter, the 'angel' Natasha, 'The Brotherhood of Freedom' establish a 'pax aeronautica' over the earth after a young inventor masters the technology of flight in 1903.

The hero falls in love with Natasha and joins in her war against established society in general and the Russian Czar in particular.

The novel correctly forecasts the coming of a great war, but in pretty well all other respects widely misses the mark of the real events that followed. Nevertheless, it is a gripping and exciting story of intrigue and plot interwoven with love and romance played over a background of world war.

The title of the novel was a conspiratory name of a female character Natasha, daughter of the mastermind of the revolutionary organization. Her unparalleled beauty and her devotion to the cause made the name quite fitting.

A sequel, The Syren of the Skies appeared in Pearson's Weekly and was published in book form as Olga Romanoff in 1894.

George Griffith (1857–1906), full name George Chetwynd Griffith-Jones, was one of the most influential British writers of science fiction and noted explorer, who wrote during the late Victorian and Edwardian age. Griffith was extremely popular in the United Kingdom, though he failed to find similar acclaim in the United States, in part due to his revolutionary and socialist views. A journalist, rather than scientist, what his stories lack in scientific rigor and literary grace, they make up for in sheer exuberance of execution.