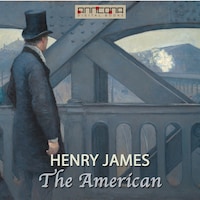 The American is a novel by Henry James, originally published as a serial in The Atlantic Monthly in 1876–77 and then as a book in 1877.

The novel is an uneasy combination of social comedy and melodrama concerning the adventures and misadventures of Christopher Newman, an essentially good-hearted but rather gauche American businessman on his first tour of Europe.

Newman is looking for a world different from the simple, harsh realities of 19th-century American business. He encounters both the beauty and the ugliness of Europe, and learns not to take either for granted. The core of the novel concerns Newman's courtship of a young widow from an aristocratic Parisian family.

One of James’s early novels, The American plunges right in to one of the writer’s most enduring subjects, that of the innocent, or at least inexperienced, American abroad, seeking to come to terms with the social customs and conventions of an old European aristocracy (think of Daisy Miller, Portrait of a Lady, The Wings of the Dove and others).

When James came to revise the book in 1907 for inclusion in the New York Edition of his fiction, he realized how fanciful much of the plot was. He made enormous revisions in the book to try to make all the goings-on more believable, but he was still forced to confess in his preface that The American remained more of a traditional romance rather than a realistic novel.

Most critics have regretted the New York Edition revisions as unfortunate marrings of the novel's original exuberance and charm. The earlier version of the book has normally been used in modern editions, as in this edition.