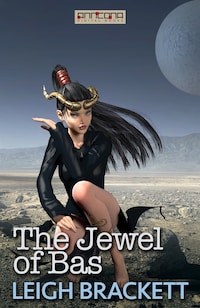 The Jewel of Bas

The Jewel of Bas is a science fiction novella by Leigh Brackett, included in The Best of Leigh Brackett (Ballantine Books, 1977.)

A quest to the Mountain of Life to save what remained by humanity from the machines that were bent on destroying them.

”Ciaran felt good. The heat of the sunballs that floated always, lazy in a reddish sky, made him pleasantly sleepy. And after the clamor and crush of the market squares in the border towns, the huge high silence of the place was wonderful.

He and Mouse were camped on a tongue of land that licked out from the Phrygian hills down into the coastal plains of Atlantea. A short cut, but only gypsies like themselves ever took it. To Ciaran's left, far below, the sea spread sullen and burning, cloaked in a reddish fog.

To his right, also far below, were the Forbidden Plains. Flat, desolate, and barren, reaching away and away to the up-curving rim of the world, where Ciaran's sharp eyes could just make out a glint of gold; a mammoth peak reaching for the sky.”

This novella was included in The Best of Leigh Brackett (Ballantine Books, 1977.) The Jewel of Bas was first published in Planet Stories magazine in 1944. E-book: ePUB, 18,000 words, average reading time 1 hour, 30 min.

Leigh Douglass Brackett (1915-1978) was an American author, particularly of science fiction, and has been referred to as the Queen of Space Opera. She was also a screenwriter, known for her work on such films as The Big Sleep (1946), Rio Bravo (1959) and The Long Goodbye (1973). She was the first woman shortlisted for the Hugo Award.