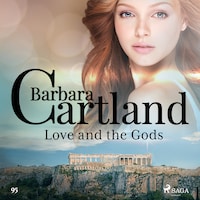 4h 14m
NarratorAnthony Wren
TypeAudiobook
SeriesBarbara Cartland’s Pink Collection
Categories
FictionHistoricalRomanceHistorical Romance
Share this book
Queen Victoria sends for the Duke of Sherbourne and asks him to undertake a very secret mission on her behalf. It is so secret that only his loyal valet, Jenkins, is told. The Duke agrees and it takes him to Greece where he had not been for some years. He visits King George who is the same age as he is and whom he has known in the past. He has been a great success as King, although he was only eighteen when he took over the throne and he is married to Princess Olga of Russia and they are extremely happy.

The Duke envies them and, although he has been pursued by a great number of beautiful women in London, he has never yet fallen in love. He consistently refuses to marry although his family beg him to produce an heir to his ancient title. Before the Duke leaves Athens, he says that he must visit the Parthenon because he wants to see again the view from the top as it is the most inspiring in the world. When he reaches the top, the only other person there is a young and beautiful girl who he senses is about to commit suicide.

How the Duke persuades Princess Thalia not to throw her life away in such a stupid fashion.

How he learns that she is being forced by her uncle to marry a Russian Prince she detests. How he goes to Delos, the island where the God Apollo was born. How, when he is there, he experiences a strange and mystical feeling that cannot be expressed in words.

Eventually the Duke finds all that he is seeking. All his and Thalia’s problems and difficulties are solved not only by the brains of human beings but with the help and guidance of the Gods themselves. This is all told in this intriguing and surprising story by BARBARA CARTLAND Barbara Cartland was the world’s most prolific novelist who wrote an amazing 723 books in her lifetime, of which no less than 644 were romantic novels with worldwide sales of over 1 billion copies and her books were translated into 36 different languages. As well as romantic novels, she wrote historical biographies, 6 autobiographies, theatrical plays and books of advice on life, love, vitamins and cookery. She wrote her first book at the age of 21 and it was called Jigsaw. It became an immediate bestseller and sold 100,000 copies in hardback in England and all over Europe in translation. Between the ages of 77 and 97 she increased her output and wrote an incredible 400 romances as the demand for her romances was so strong all over the world. She wrote her last book at the age of 97 and it was entitled perhaps prophetically The Way to Heaven. Her books have always been immensely popular in the United States where in 1976 her current books were at numbers 1 & 2 in the B. Dalton bestsellers list, a feat never achieved before or since by any author. Barbara Cartland became a legend in her own lifetime and will be best remembered for her wonderful romantic novels so loved by her millions of readers throughout the world, who have always collected her books to read again and again, especially when they feel miserable or depressed. Her books will always be treasured for their moral message, her pure and innocent heroines, her handsome and dashing heroes, her blissful happy endings and above all for her belief that the power of love is more important than anything else in everyone’s life."