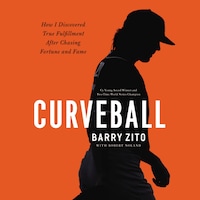 The painfully honest and personal story of one of baseball’s most intriguing players.

In Curveball, Zito shares his story with honesty and transparency. The ups and the downs. The wins and losses. By sharing his experiences as a man who had everything except happiness, Zito offers readers a path through adversity and toward a life defined by true success.

Despite achieving the kind of fame and fortune that most people only dream about, Barry Zito was plagued by both internal forces and external circumstances that robbed him of any sense of peace—until he finally found a purpose worth living for.

Barry explores the twists and turns of his own journey, including:

his dad’s constant push and pursuit for excellence, which translated into a toxic father-son relationship,how achieving superstardom in the major leagues created crippling fear,the personal destruction brought on by fame and fortune,and the disastrous seasons with the San Francisco Giants, including being benched for the 2010 playoffs and World Series.

Photos of Zito throughout his career are available in the audiobook companion PDF download.